A famous optical illusion. All lines are the same length but the line on the right looks the longest

Knowing how to best dress your body shape and balance your physical characteristics can be tricky business.  Trust me, I know, I actually wrote a book about it (insert shameless plug here.)

One of the easiest ways to work with the body you have is through the way of fashion optical illusions.  The following illustrations show just how easy, yet effective, this approach can be.  Here’s the thing- Every solution to create body balance is grounded in the use of optical illusion.  Therefore, if you can master this you’ll be well on your way to feeling great in what you wear. 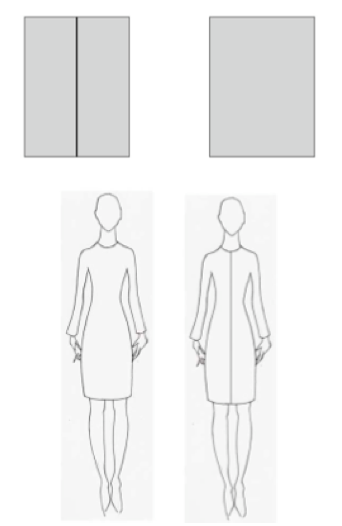 Vertical lines have a slimming effect on the body wherever you place them.  This is why vertical striped shirts, seams and creases down the leg your pants, for example, can make you look slimmer.  As you can see in the box illustration above, the box on the left looks slimmer, even though both boxes are exactly the same size.  If you look at the two dresses that are exactly the same dress, the dress on the right is slimmer looking as well. 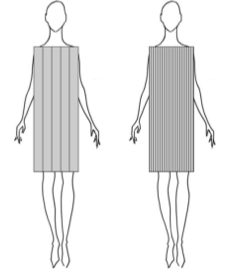 Now, the placement of the vertical lines is also important.  The closer they are spaced together the slimmer you will look.  These two shapes are exactly the same size yet the box on the right looks thinner. 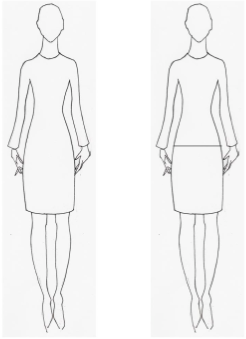 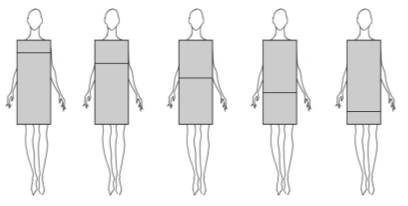 However, horizontal lines can be used in your favor if placed properly.    As you can see in the illustrations above, the boxes on the far left and far right look the slimmest, while the box right in the center, that has been cut in half right in the middle looks the widest.  Here is the optical trick about horizontal lines when used in clothing: The longer an eye travels up or down a body before it is interrupted by a horizontal line, the taller and leaner you will look.  This is why people who tuck their shirts in right into their pants can look wider than if they keep them untucked or wear a slightly longer and leaner shirt.  This is also why contrast colored belts are not advisable for petite women.  Cutting this body shape in half not only makes you look wider but it makes you look shorter.  Additionally, monochromatic dressing (dressing in shades of one color) is often encouraged for it’s slimming effects; without the disruption of a horizontal line through a color change a person looks taller and leaner. 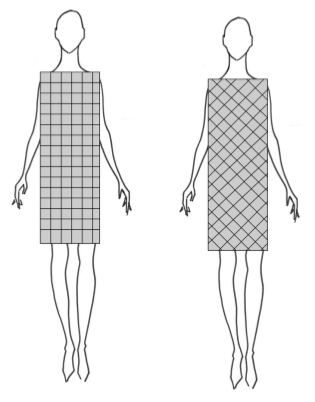 Diagonal lines are incredibly slimming and, like vertical lines, no matter where you place them on your body they will slim that area.  When I was a designer, we used to put jacket and blazer pockets on a slight angle simply because of this effect.  As you can see from the box on the right, even though the box is exactly the same size it looks smaller than the box on the left.

Fashion Optical Illusion #4- Divergent vs. Lines that Convergent Lines in the Shoulder Area 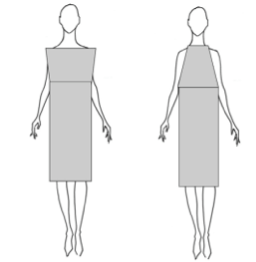 One of the easiest dressing tricks when you have large thighs is to suggest a wider neckline because of the counterbalance that is created between the top half and lower half of the body.  These two images so perfectly illustrate this point.  The dress on the left have lines that move out away from the shoulder and create width in the shoulder.  On the right, lines that cut in narrow the shoulder area.  Even though the boxes are exactly the same size, the lower half of the dress on the left looks narrower while the box on the right looks wider.  By broadening the shoulders with a wider neckline the hips appear slimmer.  For that reason alone, I never encourage halter tops on pear-shaped women.  I think these illustrations prove why.   Additionally, by widening the shoulder area of a bottom heavy woman, the eye naturally focuses on the shoulder area and ultimately makes her appear taller and slimmer. 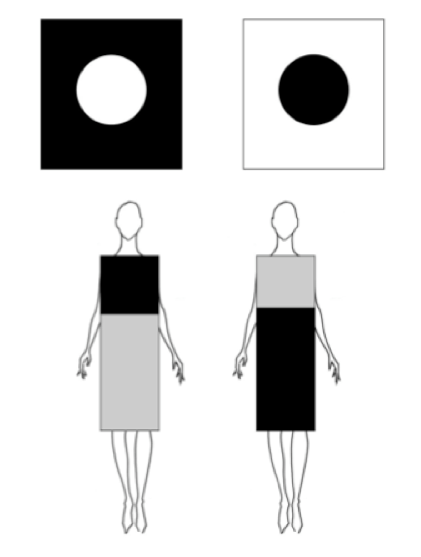 It true what they say, black is slimming.  However, I’d like to take that a step further by saying that any dark color is slimming when it’s placed next to a color that is lighter.  Case in point, you can see that the dark part of the box on the left looks smaller and the dark part of the box on the right look smaller.  These boxes are exactly the same size.  It doesn’t matter what color you choose, as long as the darker shade is worn where you are the heaviest you will look slimmer in that area.

How to Wear Booties 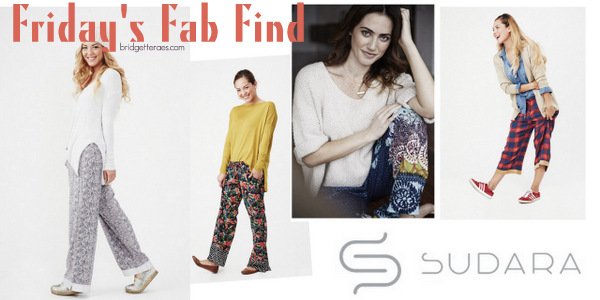 Are We Blowing the Lululemon Controversy Out of Proportion?

It is absolutely amazing that a few small tweaks to an outfit can totally transform the way you look in it… And I’ve never really noticed how slimming diagonal lines are, but that makes total sense!

Thanks Devon! When I was a fashion designer we used to angle pockets on blazers because the diagonal lines slimmed the hip area.

Hi Bridgette, which looks more slimming on a dress, diagonal Vs going down like a V, or Up like upside down Vs? Thank you!

It’s really doesn’t matter. It’s the movement of the diagonal that creates the slimming illusion.

[…] the general consensus across the web is, well, it depends. Because all horizontal stripes are not created equal. (You hear that, […]

[…] appear smaller. Many of the plus size ladies clothing also come in colors and prints that help to create the illusion of a trimmer and smaller body. Many of the designers who make these clothes prefer solid colors for their large ladies clothes or […]

[…] love this article, Slim Your Body With Fashion Optical Illusion, I found it while trolling around the net. It really applies the art of illusion to dressing […]

The Best Swimsuit Advice You Will Ever Receive

[…] the max. Ruffles and romantic prints will make your delicate side shine through. Chest padding and optical illusion can add a curve or two. The plump beauties should aim at obtaining proper support and structure to […]

[…] you wear vertical stripes, your body automatically looks thinner. But it’s good to remember that the more vertical lines you use in your outfit, the longe…. This means that you should choose clothes with smaller stripes that have less space between them. […]

Loved this..
Thank you for the tips
Apurva | http://www.buildyourpersona.com