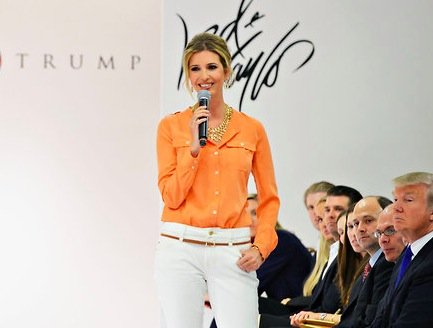 Last night I attended the fashion show launch of Ivanka Trump’s ready-to-wear collection at Lord & Taylor, which also featured her shoes, handbags, and outerwear.    My clients have been huge fans  (albeit closeted fans.  Nobody seems to want to admit to liking them) of Ivanka’s shoes for some time, so I was curious to see what all the hubbub was about with her new ready-to-wear collection.

Ivanna Trump cheering her daughter on in a glittery outfit.

While the show brought in many fans (who were made to stand in the back) even though the show started late, there were many unfilled seats.  The good news is that myself and the other “standers” got seats right before the show started, the bad news is, however, that clearly, the show didn’t get the attendance it was expecting.

The show was to start promptly at 6 pm (at least according to the invitation) which, in fashion-speak, means 6:30.  There was a cocktail reception prior to the show and I got to see industry big wigs cavorting with the die-hard Ivanka fans who got a special invite.    Moments before the show, Donald arrived, as did Ivanna Trump (who was dressed in a sparkly disco looking getup that I would imagine Oksana Baiul would wear when she hits Ivanna’s age), Donald’s former wife Marla Maples, and other Trump family that I didn’t know as well by sight.  Each special guest was escorted to their seat like royalty, along with Ivanka who took a seat with her family in the front row.  I thought this was sort of weird.  Most fashion designers are usually backstage frantically trying to get the show together.  However, let’s all not ignore the elephant in the room, “fashion designer” should be used very loosely in this situation.

Before the show started, Bonnie Brooks, president of Lord & Taylor, got up and said a few things about the collection and told everyone that “Ivanka Trump is the most searched designer on our website.”  After that, Ivanka got up and said a few words, thanked everyone, and took a seat next to her father and husband.  Again, why is she not backstage?

The show began and, boy, did I want to like it.  Well, let me rephrase that.  In terms of whether or not the show was good depends on which perspective from which I look at it.  On the one hand, the collection was nothing to write home about.  With the exception of a few standout pieces, there was nothing particularly fresh or exciting.  However, on the other hand, when you look at whom Ivanka is targeting as her customer, clothes that a middle-American woman would want to wear, then I can see the show a bit more positively.  As she described it, “My inspiration is really the woman I’m designing for, which is a confident, powerful working woman. She sees her job as important, but she also sees her weekends as important as her evenings. So I’m creating a true lifestyle brand for that person.”  This being her target customer, however, still didn’t make me love the show. 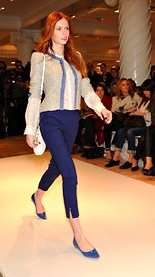 First, this show was not a high fashion show that took place at the tents during fashion week.  Unlike shows of that type, this show invited some die-hard customers to view it.  That said if this customer is a middle-American working woman, why were every model in the show 12lbs and about 21 years old?  I get it, we don’t need to argue about the use of uber-skinny, prepubescent girls used in fashion.  My point of this observation is the fact that, if this was a line for women probably ranging in age from 35-45 who have real lives, real jobs, and real responsibilities, would it have killed someone to throw a woman who was born before 1992 into the model lineup?  I would have been more inspired if I saw a sassy 44-year-old rocking the trench or a relatable woman in her 30’s with a real body in a weekend look.

Next, while there were some standout pieces, in particular, an orange silk tunic dress and a great riding pants in ivory, for the most part, the pieces were really basic.  The problem with ready-to-wear sportswear is when you pull the collection apart and look at each piece on its own, they can actually be a bit humdrum.   From personal experience, as my years as a sportswear designer, designing a complete and cohesive collection can be like doing math.  On the one hand, the pieces need to harmonize; yet on the other, each piece needs to be able to stand-alone and be captivating, as few women ever buy a complete collection and, instead, pick up a piece or two from a collection to incorporate into their existing wardrobe. So, while I appreciated how the looks were styled for the show, imagining them on an everyday woman, juggling everyday life, and wearing them on their everyday bodies, I wondered if they would be like fashion Valium.   Sure, on a 20-year-old model, these looks may have looked riveting, yet I couldn’t help but visualize how they would look on a woman who worked a full day, carpooled, and then had to come home and figure out what to cook for dinner.   While Ivanka Trump very much appreciates the life of her target customer, has she ever really lived the life of this woman?  Doubtful…and her collection showed it.  Most of the pieces just looked like bad Ralph Lauren discards that never made the collection.  And, just what the world needs, more blah clothes for the average workaday lady.

To her credit, Ivanka Trump is a smart and savvy businesswoman, probably one of the best out there today.  Yet, that same strength is exactly what I think killed her line for me.  It was all business and not enough creativity, not enough wow factor, and not enough soul.  She seemed to dumb it down to the most basic and boring looks that, sure, may make some sales but won’t have anyone passionately in love.  Having dressed and designed for this woman for years and years, I just don’t think that is enough.  Regardless of the price point or the fact that this is a hardworking American woman, even they still want to be excited and, most importantly, deserve to be.  Yes, she is giving the world good, solid, basic (and somewhat snoozy) fashion that will absolutely appeal to women, while having well-meaning intentions.  But, sometimes, that is just not enough.

However, I’m willing to be wrong with my assessment.  Perhaps I ask too much of designers and the collections they put out for this customer these days.  After the show, fans rushed the stage to get close to Ivanka and there were a lot of people perusing the collection after the show ended.  Yet, I left there still wanting more.

So, I am sorry to say, while I remain a fan of her wonderful shoes, I was hoping for more from her collection. 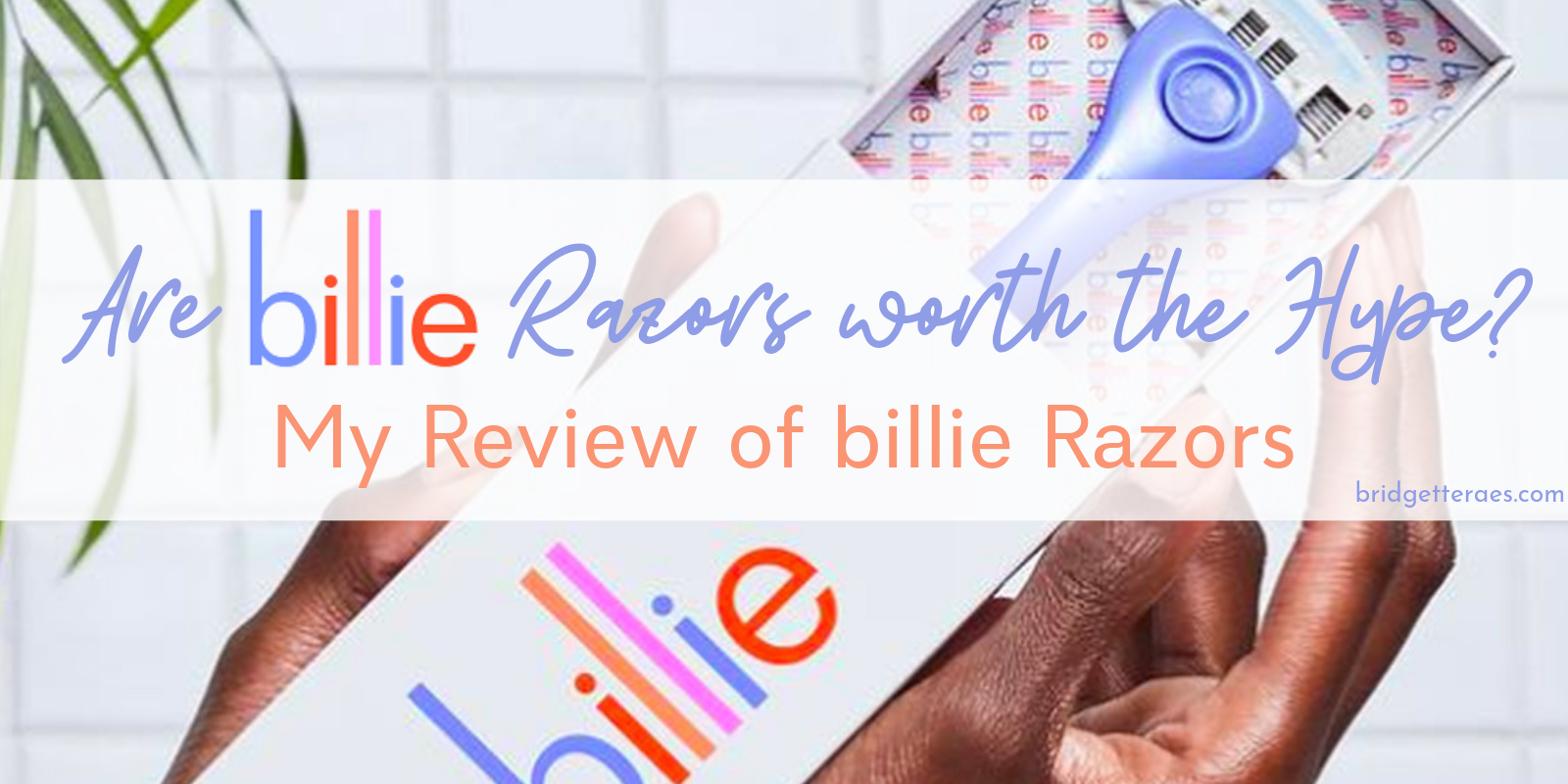 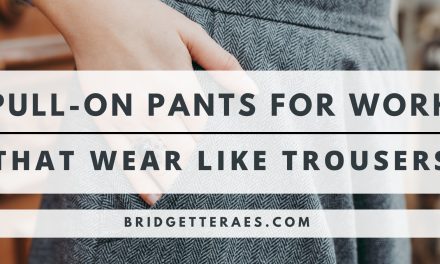 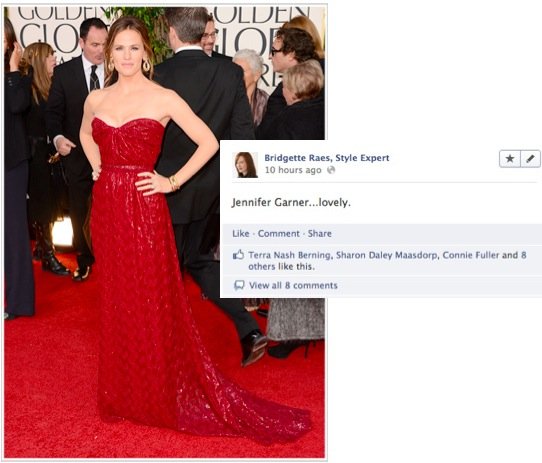 My 2013 Golden Globes Fashion Recap: The Good, The Bad and The Plunging Neckline

How to Tell Someone They Need a Fashion Makeover (Video)

[…] she ever really lived the life of this woman?  Doubtful…and her collection showed it,” wrote style expert Bridgette Raes.  “Most of the pieces just looked like bad Ralph Lauren discards that never made the collection. […]

Thanks for the pingback in your blog! Great article. Seems we both agree!

Her line wouldn’t of made it to Project Runway…Ugh!

No woman should buy products from a woman who supports a candidate that has such little regard for women and minorities.

This post was from YEARS before Trump ran for president. I will tell you I have several clients who flat out refuse to buy Ivanka Trump clothing and shoes now. It’s a shame, really, her shoes are really comfortable. While I don’t like to share my personal political views on my blog, I find Donald Trump more than repulsive.