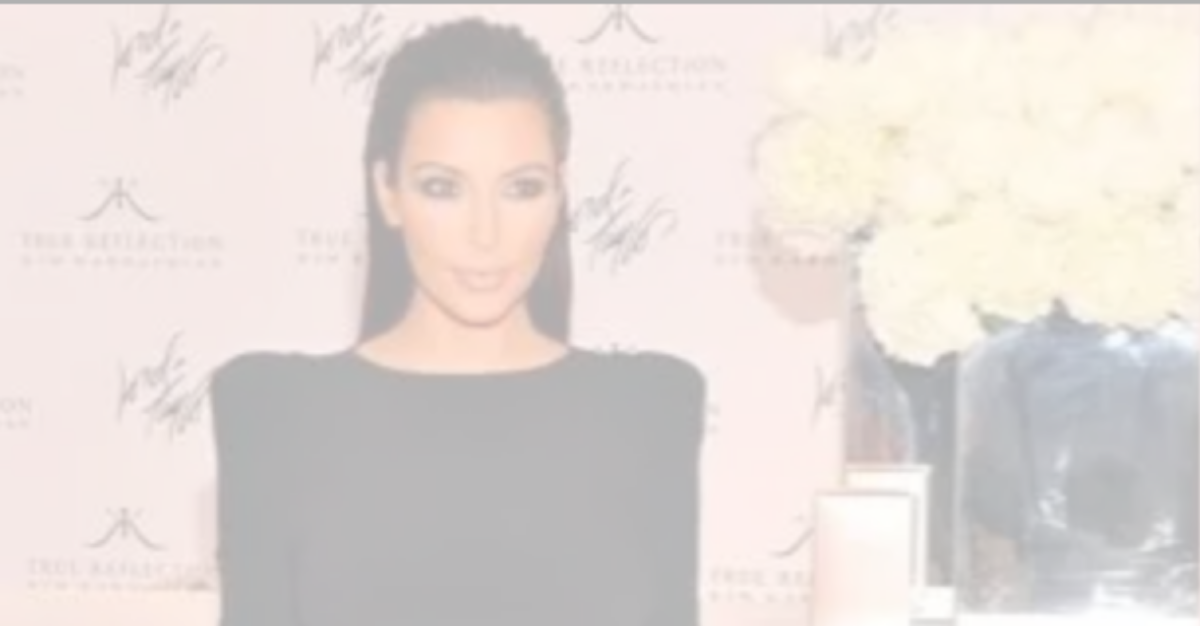 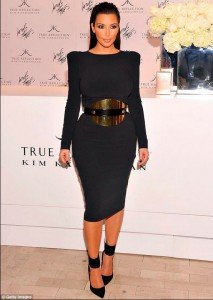 I love when celebrities make fashion mistakes that don’t flatter their bodies because they give me great opportunities to show you how you can avoid making them yourself.  Given how polarizing Kim Kardashian is, whether or not you love or hate her is not in question here.  Please don’t send me hate emails telling me how much you love her and that I shouldn’t be mean to her.  Honestly, I don’t consider Kim Kardashian enough in my life to have an opinion either way.   What I want to talk about is how she (or her stylist) chose badly for the natural proportions of her curvier body.

While I’m not a fan of the belt she is wearing with this dress, it’s not the style of it as much as the disservice it is doing to her body shape that irks me.

I understand Kim’s body well because, proportion-wise, mine isn’t far off from the way she is built.  Granted, weight-wise, I probably have a good few thousand pounds on her, but when it comes to ample boobs and a wider bottom half, I get what she is dealing with.

The first lesson is when you have a large chest.  In order to keep large boobs from looking disproportionately larger, you want to keep off the body that shortens the torso.     Wide belts, empire waistlines, horizontal stripes and even shorter shirts will shorten the waist and, whenever you shorten any part of the body, you make it appear wider and larger.   This is why monochromatic dressing is so slenderizing. 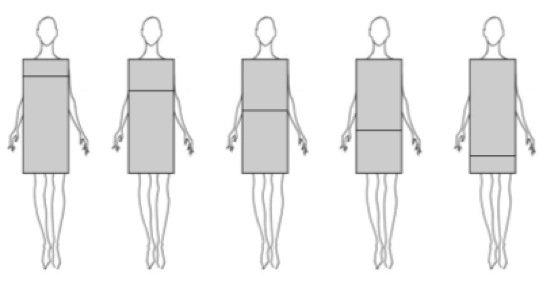 The photo above explains this concept further.  All the boxes are the same width, yet the box in the middle looks the largest because the horizontal line cuts across right through the center of the box.  The longer an eye travels before getting intersected by a horizontal line on the body, the slimmer and taller you will look, which is why the boxes on the far right and left are so slimming. 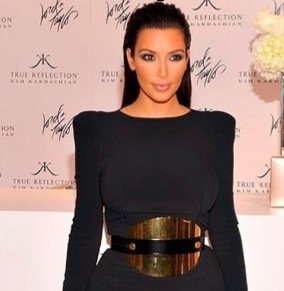 Kim’s boobs look disproportionately big because, with a large chest, her torso already looks naturally short, even if it isn’t, because of her cup size.  Add a very large, distracting belt, and her torso is shortened even more.   In addition, the wide shoulder line (which can have a counterbalancing effect on her wider hips) fails here because they’re widening the look of the upper half of her body and making her boobs look even bigger.  Lastly, I’d open up her neck a bit.  A high neckline can make big boobs look like they start at the neck.

I also want to talk about Kim’s shoe choice.  Who doesn’t love a gorgeous ankle strap?  Yet, ankle straps aren’t for everyone, especially those who have large calve and or ankles.  While Kim’s legs are hardly large, her shoe choice and skirt length are making them look bigger than they actually are.   While the skirt length isn’t that bad, it’s the horizontals in the ankle straps that are making her legs look heavy.  Remember the tip above, the longer an eye has to travel up the body before it is intersected by a horizontal line, the slimmer that body part will appear. 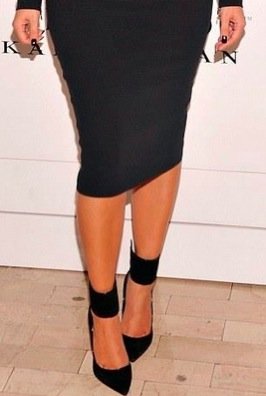 Below, is the same woman in both photos.  On the left, with ankle straps and a skirt hem that ends at the widest point of her calves, her legs look heavier.  By simply changing the shoe and hemming the skirt to the narrower part of her calf, in the photo on the right, her legs lose about 10 lbs. 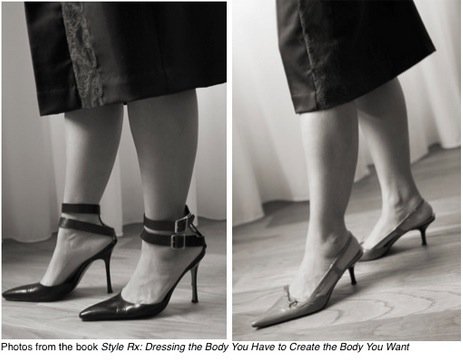 Through very crude Photoshopping, I have made the suggested changes to Kim’s outfit that would make her the dress more flattering on her body. 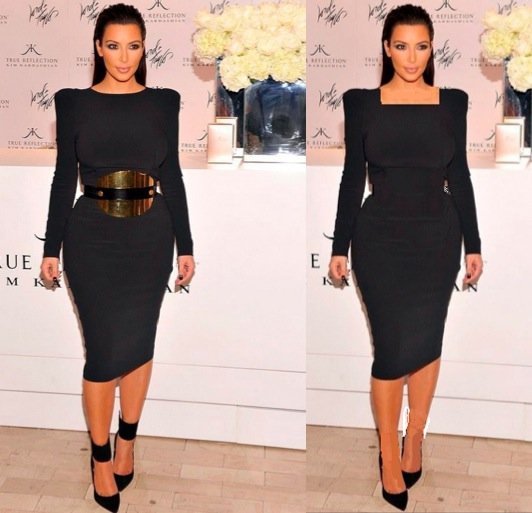 By losing the belt and opening the neckline slightly, Kim loses about a cup size.  In addition, the heavily padded shoulders on the dress how do her the service of adding some balance to her heavier bottom half as does the square neckline which also widens her shoulders.  Lastly, by losing the ankle straps, Kim’s legs look leaner.

When dressing the body you have, it’s not about denying the way you’ve been naturally built, but, instead, learning how to make them looks the most flattering.  Kim Kardashian has great curves and if she worked with them vs. against them, she’d look even better in this outfit. 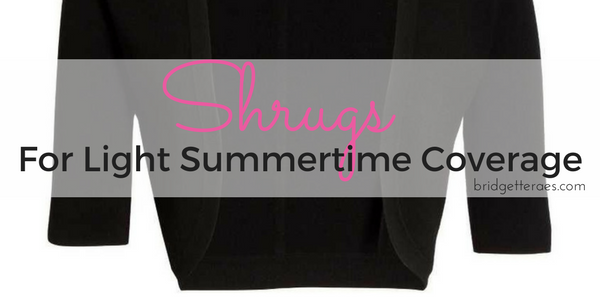 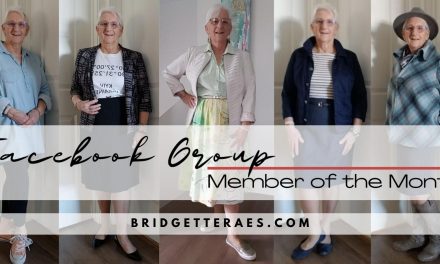 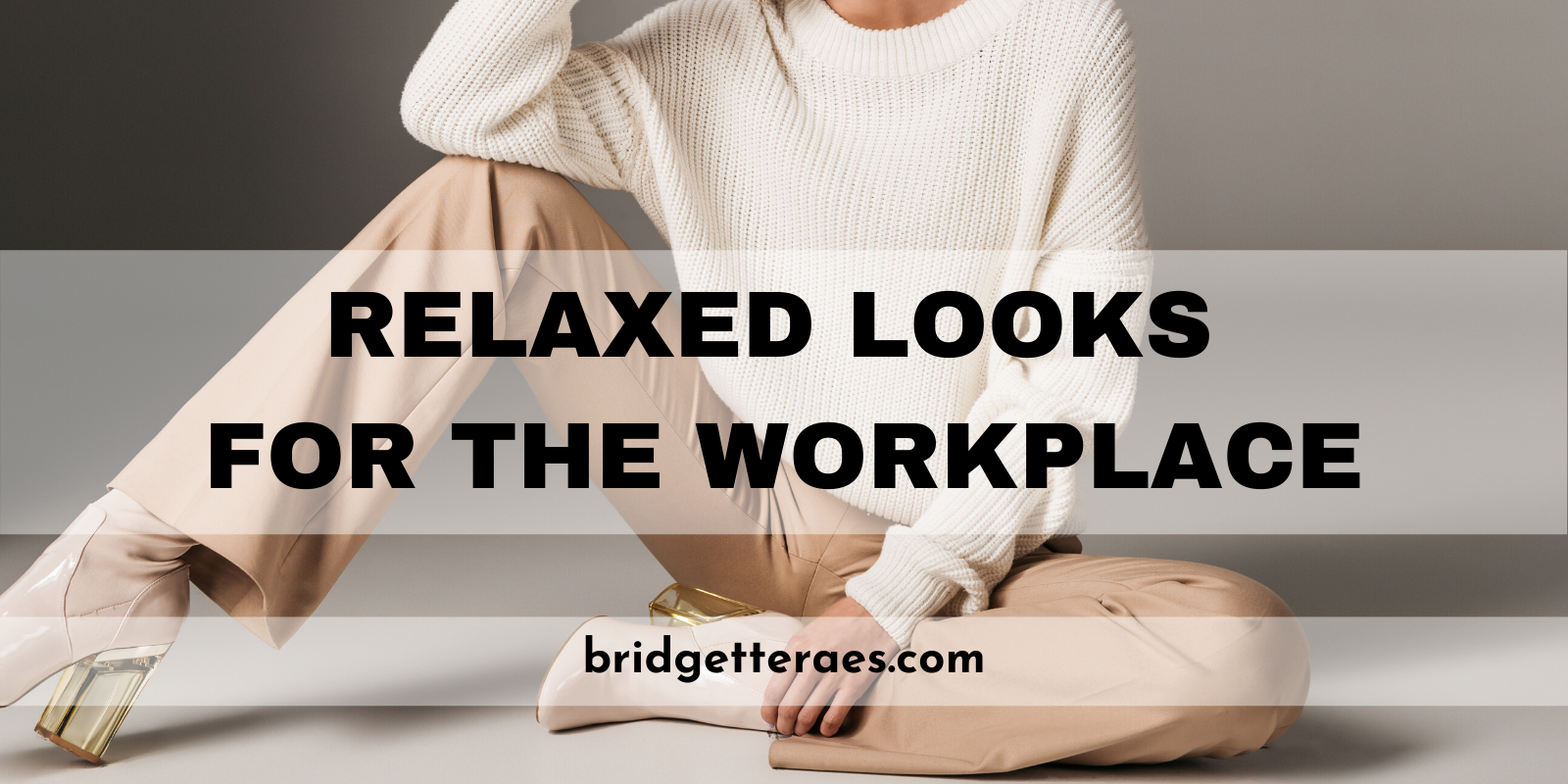 Relaxed Looks for the Workplace

I think Kim makes these mistakes often. As you stated she is not large woman but her proportions need wrangling sometimes.

Thanks! After working with women and their bodies for ten years, I’ve learned that most bodies need a little wrangling to get them to look their best. The problem with trends is that we want to enjoy all of them and are willing to forsake what is best for our natural body shape. Sometimes it is better just to admire a trend from a distance if it isn’t right for you. I swoon over ankle straps but wouldn’t put one on my body for a suitcase full of money. Thanks for your comment.

It’s truly amazing what a difference just a few small tweaks can make! She looks 1,000 times better after you’ve finished making her over.