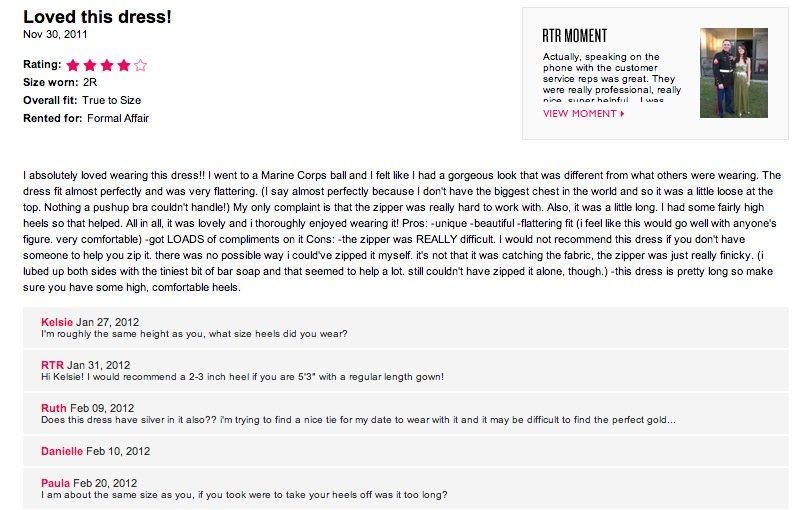 In a brilliant move made by the Rent The Runway, a site that rents designer dresses and accessories at about 10% of the retail price, now allows its users to upload photos of themselves wearing the clothing allowing visitors to search for women with similar body characteristics, including age, height, weight and even bust size, to get an idea of how a piece may look on them.

Smart move, right?  So, why do some luxury brands have a problem with this? 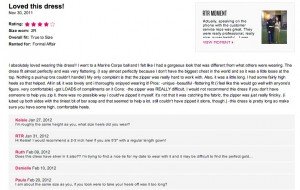 In a New York Times covered story, the move of using real women was called  the “latest example of a retailer rejecting the idea that women want fantasy when they shop” and I couldn’t agree more.

One of the biggest complaints I’ve heard from my clients when they shop, particularly online and in catalogs, is that they can’t really envision themselves in the clothing while staring at a 5’11 glamazon who doesn’t have a spot of cellulite, chunky arms or unruly breasts.  With this new move by Rent The Runway, visitors of the site can not only view real women in the clothing, they can ask questions of the other wearers and search for photos of women who closely resemble their own body’s dimensions.  Rent The Runway will not be pulling the model photos on the dresses, but they do plan on directing the visitors of their site towards the real body photos.

Marc Beckman, founder of Designers’ Management Agency (who officially wins my jerk of the day award) was quoted  saying, “When you present a luxury brand, in my opinion it’s not about being accessible – it’s all about the dream, it’s all about the aspiration.   It’s not about the girl around the corner that lives near you and has a Gucci jacket, a martini in her hand and is smoking a cigarette – it’s about the supermodel in Paris, shot by the best photographer.”

Is this guy for real?

Rent The Runway countered and said,  “Real women are aspirational, when they’re confident and having fun. We believe the industry has gotten it wrong when they think of what’s aspirational.”

While it should be noted that some designers are becoming more inclusive by doing things like using plus-size models in their campaigns, plus-size clothing lines and the use of “real people”, Rent The Runway’s response to that was smart, and reminded us all that these true-to-life looking folks aren’t all that real, citing editing, airbrushing and retouching, which essentially removes the realness.

To me, while I’m sure jerky Marc Beckham’s opinion on the using photos of real women in designer dresses doesn’t represent the whole of luxury brands, I believe that what he said confirms what a lot of real women have suspected for a long time, but never had any proof of– that luxury brands care more about the image portrayed than the customer who buys it.  While it’s mildly (well very) insulting, there is something liberating about finally knowing that the collective noses of luxury market really are turning up at those who aren’t perfect.  Yes, we still may choose to wear their clothing (even though the luxury market thinks we shouldn’t be…or at least shouldn’t be doing it proudly), I would imagine a sweet satisfaction has to happen when a real woman with confidence uploads a photo of herself in a designer dress to Rent The Runway and thinks to herself, “See you snooty designer brands, you may not want me, but I still look damn hot in your dress.”

What a stupid missed opportunity for these luxury brands to embrace the majority of women out there who love beautiful clothes but often feel shunned because, up until now, they haven’t felt perfect enough to wear them.  Thankfully, Rent The Runway is changing that. 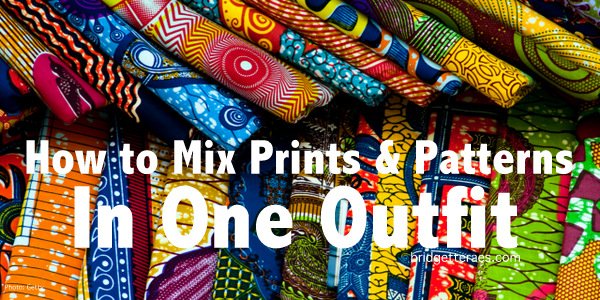 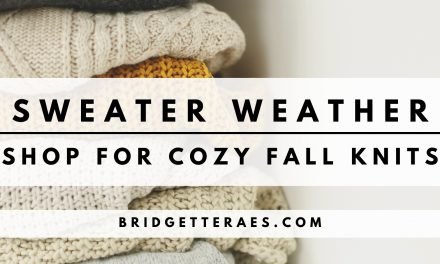 a real woman wears her strong curves with confidence

Have you ever thought about creating an ebook or guest authoring on other blogs I have a blog based upon on the same ideas you discuss and would love to have you share some stories/information. I know my visitors would enjoy your work. If you are even remotely interested, feel free to shoot me an email.

I think it’s a smart addition. But the “real women” term means what exactly? Are some women somehow less real because of their.. what?

Ah, I just reread your statement about Photoshop and other retouching methods rending PHOTOS of certain women unreal. That makes sense. Sorry I didn’t see that at first.