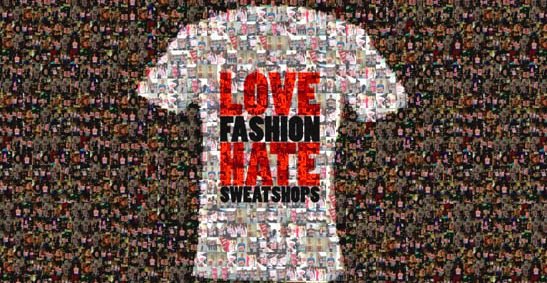 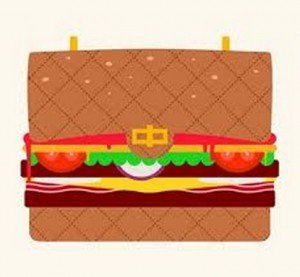 I’m usually pretty good at spotting a trend as it emerges and I believe one of the hottest trends right now, the fast fashion trend, is finally starting to die.  If you’re unfamiliar with what fast fashion is, according to Wikipedia: Fast Fashion is a contemporary term used by fashion retailers to express that designs move from the catwalk quickly in order to capture current fashion trends.  These trends are designed and manufactured quickly and cheaply to allow the mainstream consumer to take advantage of current clothing styles at a lower price.   Fast fashion has also become associated with disposable fashion because it has delivered designer product to a mass market at relatively low prices.

Basically, Fast Fashion is the equivalent of Fast Food. 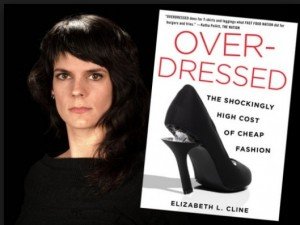 Last year I interviewed Elizabeth Cline, author of Overdressed: The Shockingly High Cost of Cheap Fashion, on my radio show after reading her book and being so grateful to her for bringing this important topic to the forefront.  Cline herself was a Fast Fashion addict, and her moment of realization that her shopping behavior needed to change came when she she found herself lugging home seven pairs of identical canvas flats from Kmart (a steal at $7 per pair, marked down from $15!).  If you haven’t read her book, I highly recommend you do and you can also listen to my interview with her here.

As a result of fast fashion, clothes are seen as cheap trash where the quality is measured in how many washes it gets before it falls apart.  Americans have become so disconnected to their clothing that they’re no longer caring for it, mending or respecting it.   In these days of the fast fashion trend, there is little reason to see clothing as something that should fit well or look particularly good.  Why get a $15 pair of pants hemmed properly or pay good money for a well-fitting quality wardrobe item when you can get a cheaper one that will do just fine?  Why spend decent money on one sweater when you can get ten from a fast fashion store for the same price? 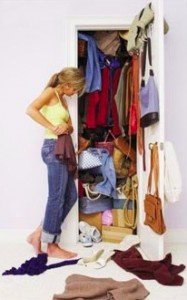 Yet, despite the savory price tag and hard-to-pass-up prices that come with fast fashion, as Cline told me, the fast fashion trend has caused people to become “deeply unsatisfied with their clothing.”  It jam-packs closets in a gluttonous manner with cheap purchases because the sale is just too good, with merchandise turning over in stores at such a rapid pace (a store like Zara can design, produce and deliver a garment to all their stores in as little as two weeks) and it creates the constant impulsivity to want to shop and buy more.

Going back to the comparison of fast fashion trend and fast food, people often live in extremes and it is only after hanging out in one extreme that we start to crave the opposite.  Imagine if your diet consisted only of fast food.   You would doubtless feel sick, sluggish and unsatisfied if that was the only food you ate.  It is often this gluttonous and unsatisfied feeling that arises when we first become aware of the fact that what we’re doing isn’t healthy and, soon after, we start to search for alternatives.  Like the food movement, where people started to become aware of where their food came from, what it contained and how local or fresh it was, this is exactly what is starting to emerge in fashion right now.  With our sick closets, stuffed with cheap, empty buys,  we are beginning to crave the alternative.  We want to know where our clothes come from, we want to support domestic businesses and we are increasingly willing to spend more money for less clothing of higher quality. 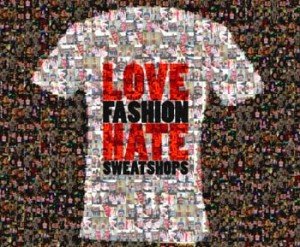 Fast Fashion has basically closed down the domestic garment manufacturing industry— only 3% of what Americans wear is actually made on U.S. soil (in 1985 it was 85% and in 1960 is was 100%).  As I read in Cline’s book, the apparel industry was named one of the fastest-dying industries in America in the past decade with over 650,000 apparel jobs lost in a ten-year period ending in 2007.  The production of clothing has all but moved to overseas countries like China, Bangladesh and the Dominican Republic, to name a few, given the labor intensive nature of clothing.  The cheaper the labor, the cheaper the clothes can be priced.

Yet, we can’t talk about cheap labor without addressing volume, as they go hand in hand.  Price is often driven down by huge volume and the only way to do huge volume is to create a retail system where the customer is lured back to the store again and again on a weekly, even daily, basis.

As a result, the attitude of this cheap Fast Fashion has caused the customer to expect to pay little to nothing for their clothes while getting more.  In fact, as Cline told me, people now spend more per year to eat out than they do on their clothes;  “We are buying and hoarding roughly twenty billion garments per year as a nation.”  This is a stark contrast to the way it was years ago.   Cline also wrote in her book that, “We pay less for clothes when measured as a share of our income than ever in history” and cited that according to 100 Years of Consumer Spending, a 2006 study by the U.S. Department of Labor, the average American family in 1900 had an income of $750 per year and spent 15% of their earnings on clothing.  In 2010, Americans spent an average of about 3% of their yearly income on clothing yet got a lot more— a whole lot more. 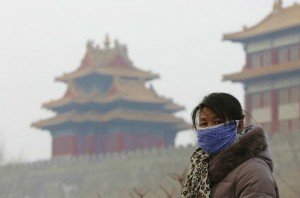 Smog and pollution in China due to fast fashion production.

Additionally, we’re not only changing our ways for own personal satisfaction and to support domestic businesses, but we’re also changing because of the negative environmental impact that fast fashion is wreaking on our planet.  Fast fashion isn’t environmentally sustainable, period.  Americans basically see places like the Salvation Army as a dumping ground and a lot of the donations are so poorly made that most of it is unusable.  In addition to the enormous amount of pollution fast fashion creates, our fiber consumption has gone from 10 million tons of fiber worldwide in 1950 to 82 million tons today with the water needed to produce that much fiber up to 2 trillion gallons per year.  Most disturbing is the fact that these large fast fashion corporations that need to show growth every year have already begun to target and open stores in largely populated countries like China.  “What happens when a country populated with 1.3 billion people start shopping like Americans?” Cline remarked when I interviewed her.

Yet, like I said, the fast fashion trend is starting to show signs of letting up and a July 5th USA Today article confirmed that some apparel manufacturers are starting to ‘reshore’ back to the United States.

How to Overcome the Fast Fashion Trend

The first argument that a person will cite as to why they can’t stop shopping at fast fashion stores is price and that they can’t afford better.  While this argument is valid, especially during hard economic times, do you really need to buy as much as you do?  The first way to overcome your addiction to fast fashion is to simply buy less.  I have certainly been so broke in my life that I have had to go into a fast fashion store, I admit.  Yet, I never take more than I need and I use and wear what I buy.  Regardless of the price point, I have an incredibly streamlined closet and nothing in there doesn’t belong.  Don’t be lured in by the cheap prices to load up on what you don’t need.  If you ever find yourself in Cline’s position, lugging home multiple pairs of an item simply because the price was too good to be true, you may want to step back and reconsider how you shop.  For tips on how to maximize the use of clothing you own and how to buy smarter, this is what my blog is for.  You can read my tips on Wardrobe Management to get you started, here.

I recommend you check out Elizabeth Cline’s book and also a blog and shopping directory of designer’s who abide by at least one of the following:

Ecouterre.com: I’m a big fan of this site as an environmentally friendly resource for fashion.   Ecouterre is a website devoted to the future of sustainable fashion design. They’re dedicated to showcasing and supporting designers who not only contemplate cut, form, and drape, but also a garment’s social and environmental impact, from the cultivation of its fibers to its use and disposal.

I don’t think the fast fashion trend will ever truly die, just like there will always be a McDonald’s in every town around the globe.  However, what I am happy to see is that a balance is starting to emerge, that people are naturally turning towards healthier alternatives and beginning to become more aware.  In a strange way, I truly believe we have fast fashion to thank for this change.

Statement Bracelets: How to Get the Most Out of Them

Summer’s Eve Hail to the V ads: If Your Vagina Could Talk, Here is What it Would Say 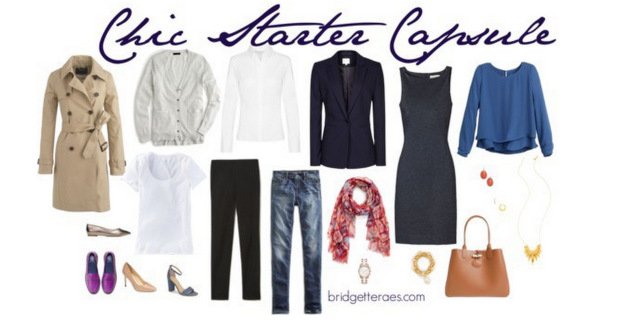 How to Start a Chic Wardrobe Capsule 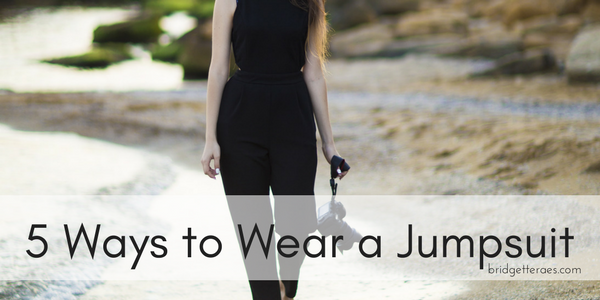 Five Ways to Wear a Jumpsuit

Thanks! Glad to support all of you! I worked as a fashion designer for ten years before starting my business! Best of luck to you!!

Thank you for writing on this topic with the types of data and emotional intelligence that make it accessible. Would it be possible to create a blog entry that features a numerical discussion of a streamlined wardrobe in terms of how many of each type of wardrobe item would be realistic for functionality (maybe for a causal wardrobe)?

Thanks Karen! This is definitely something I can work on for a future post! Stay tuned!!!

Instagram! Does It Pose A Threat To Traditional Photography? | Styling On The Edge

[…] The Fast Fashion Trend is Over…Or At Least Starting to Die (bridgetteraes.com) […]

[…] as someone who is not into ‘fast fashion‘, I confess that I do visit Top Shop rather a lot. The quality of their clothes may not be […]

This is such a great post and I really enjoyed reading them! didn’t know about Cline’s book too. I used to shop fast fashion, but as you mentioned, I started to notice I don’t love them as much and keep getting rid of them after only one season (which I don’t like). So I no longer shop there (especially f21..) and love all of my clothes now. It’s funny that you compared with fast food and fast fashion. So true! Thanks for sharing this post- xo akiko

Oh and I’m your new follower! ps do you have bloglovin account? I look forward to seeing your post! xo akiko

What a biased article. The biggest fast fashion brand is zara and it has maintained it’s production base in its home country. Not china or elsewhere.

Actually, that’s not entirely true. 80% is manufactured in their home country and the rest in Eastern Europe. They are also one of the few fast fashion brands that owns their own factories. Yet, I’m still not sure what your point is, fast fashion is fast fashion and Zara is one of the fastest given the fact that they are a vertical company. They may not manufacture in China but they are one of the companies responsible for the issues that fast fashion has caused.

The End in Trend | Inspired in the City

Inspired in the City - The End In Trend