Feel Better, Do Better: Why How You Feel in What You Wear Matters 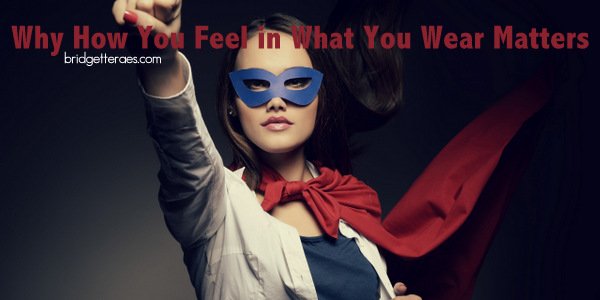 My husband works in real estate as a broker here in Brooklyn.  A few weeks ago he said something that reminded me that how you feel in what you wear matters.  As you can probably guess, my husband spends a great deal of his time showing property listings to potential buyers.   Quite often, the sellers of these homes just completed renovations, like redoing the floors and painting, among other things, before putting them on the market.  Because of this, it’s not uncommon for these sellers to ask that people who enter their homes either take off their shoes or ask that everyone wear these protective booties, similar to what you see in an operating room.  When my husband came home from work one night he said, “It’s really hard to feel commanding when you’re standing around in a pair of disposable booties.”

Now, obviously, wearing protective booties is bound to make anyone feel a bit silly.  This example is a bit exaggerated, but think about times during your job, or even in your personal life, where what you wore affected how you felt and, as a result, affected how you interacted with others.  Even if it was slight, you may have noticed a decline in your confidence level or avoided certain people.  Or, perhaps you decided to power through, regardless of how you felt in what you were wearing, but found yourself distracted in your mind with thoughts that you wished you wore something else.

One memory that stands out for me where this happened occurred when I went to meet up with a friend and colleague for lunch.  This friend of mine works in corporate career coaching and she and I would frequently get together.  It wasn’t anything major, I would usually grab a salad, head up to her office and she and I would chat while eating.  While what I wore hardly mattered, I usually made it a point to look presentable.

Well, one day when we had plans to meet it was pouring outside.  I mean, cats and dogs.  I decided to throw on a pair of boyfriend jeans, casual waterproof loafers and an ivory ribbed sweater.  While casual, the outfit was okay, a little under-dressed for an office setting, but acceptable.  It was my hair that was a mess.  My hair was long at the time and, because of the weather, I didn’t bother washing it, threw it up in a bunch of clips and put a scarf around my head, like a headband.  Cute…for casual brunch, but not for a work environment.  But I didn’t care.  It was raining, I was going to be sitting in my friend’s office and knew I wouldn’t see anyone.

Well, turns out I was wrong.  Of all days, the president of the company happened to visit my friend’s office.  And, as luck would have it, my friend used this opportunity to introduce me and mention to her boss that I was the person she had been talking about having come in and do a seminar of image.  Yes, the me who was sitting there in an outfit that I would wear to help a friend move.  Whoops.

Whether or not the way I was dressed had any bearing on the impression the president of the company got of me, what I did realize was that the way I was dressed affected me terribly.  I became so self-aware, found myself over-explaining myself while making excuses for what I was wearing, blaming the weather, and so on.  This was time that could have been better used promoting myself, which I probably would have if I felt better about what I was wearing.

We all get so caught up on wearing the right thing to impress people or to look the part, but often give little thought to how what we are wearing effects how we perceive ourselves.  As I say in my online course, if you think about it, so often, everything hinges off the way we feel about the way we are presenting ourselves to others.

You don’t have to be an expert in style to know when something you are wearing just feels off and you also know when something you are wearing makes you feel great.  I have seen this happen so often in the dressing rooms with my clients.  They put the right thing on and in that second their body language, confidence level, happiness and enthusiasm changes.  It’s like, suddenly, the connection between who they are on the inside and on the outside is connected, like a light being switched on.

Sadly, many women are really tuned out and unable to know when they have found something that sparks that connection of choosing clothing.  If this is you, here are five quick ways to know.

You feel excited, not daunted, to put yourself out there

Have you ever found the perfect thing to wear to work, an interview, an event, or a date?  Your excitement about about that event actually increases.  I remember when I found the perfect dress to wear to a wedding last year (I blogged about it).  It’s not that I wasn’t looking forward to attending the wedding, but my excitement to wear what I had bought made me even more upbeat about going.

The strongest way we are by perceived by others is through our non-verbal communication, which includes body language and image.  Even if we don’t know this Stamford University statistic, we instinctively know this.  Think about every time you had somewhere important to go.  What you were going to wear was probably one of the first things you thought about.

Your body language changes in what you wear

Watch your body language when you put something on that makes you feel great.  It’s often apparent in the dressing room.  I have noticed that there is a powerful ease when this happens with my clients.  They start to stand more naturally, even talk differently.  Now compare this to times when you have found yourself in a situation where you felt the opposite.

I think one of the most frustrating feelings is when we don’t feel understood by others, like they just don’t get us.  Clothing isn’t the only way we express who we are, but it certainly is a large tool for doing so.  When you walk into a room feeling great, you often don’t even need to open your mouth or talk to anyone for people to get who you are.   And, it’s not just the what you wear that does it, it’s how you feel in what you are wearing that changes how you engage with the those around you.

You don’t care about the price tag

So often I have had clients say to me, “This is coming home with me, I don’t care if I have to put everything else back, I need this.” I just had this happen recently with a client when she found this teal green sheath dress.  While this is not a free pass for overspending, notice how little the price tag matters when something you put on feels amazing.

You forget about the clothes

When I started wearing makeup as a teenager, I remember my mom saying, “when you wear the right makeup it shouldn’t look like you are wearing any.”  Of course, as a young girl, this hardly made any sense.  I was finally let loose in the drugstore cosmetics aisle and I coveted the bright pink Wet-n-Wild lipsticks (forgive me, it was the 80’s), but now I get it.  Makeup plays more of a supportive role to enhance my features, not drown them out.

Clothing can often be very similar.  A very wise client once said to me, “There is a big difference between getting the compliment “That’s a great dress” and “You look great.”  In the former statement, the dress is getting noticed and in the latter, the woman.  There is nothing wrong with getting compliments on your clothing, but when harmony is created between a woman and what she is wearing, the clothing is more of a backdrop for the woman to shine.  In addition, when a woman feels great in what she is wearing, she becomes less consumed by the clothing and is able to be more present to what is going on around her. 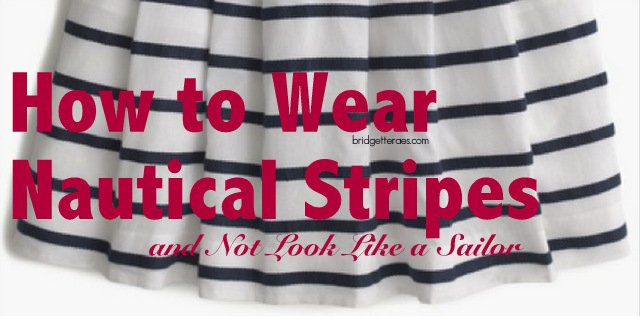 How to Wear Nautical Stripes and Not Look Like a Sailor

How to Warm Up Black with Natural Accessories 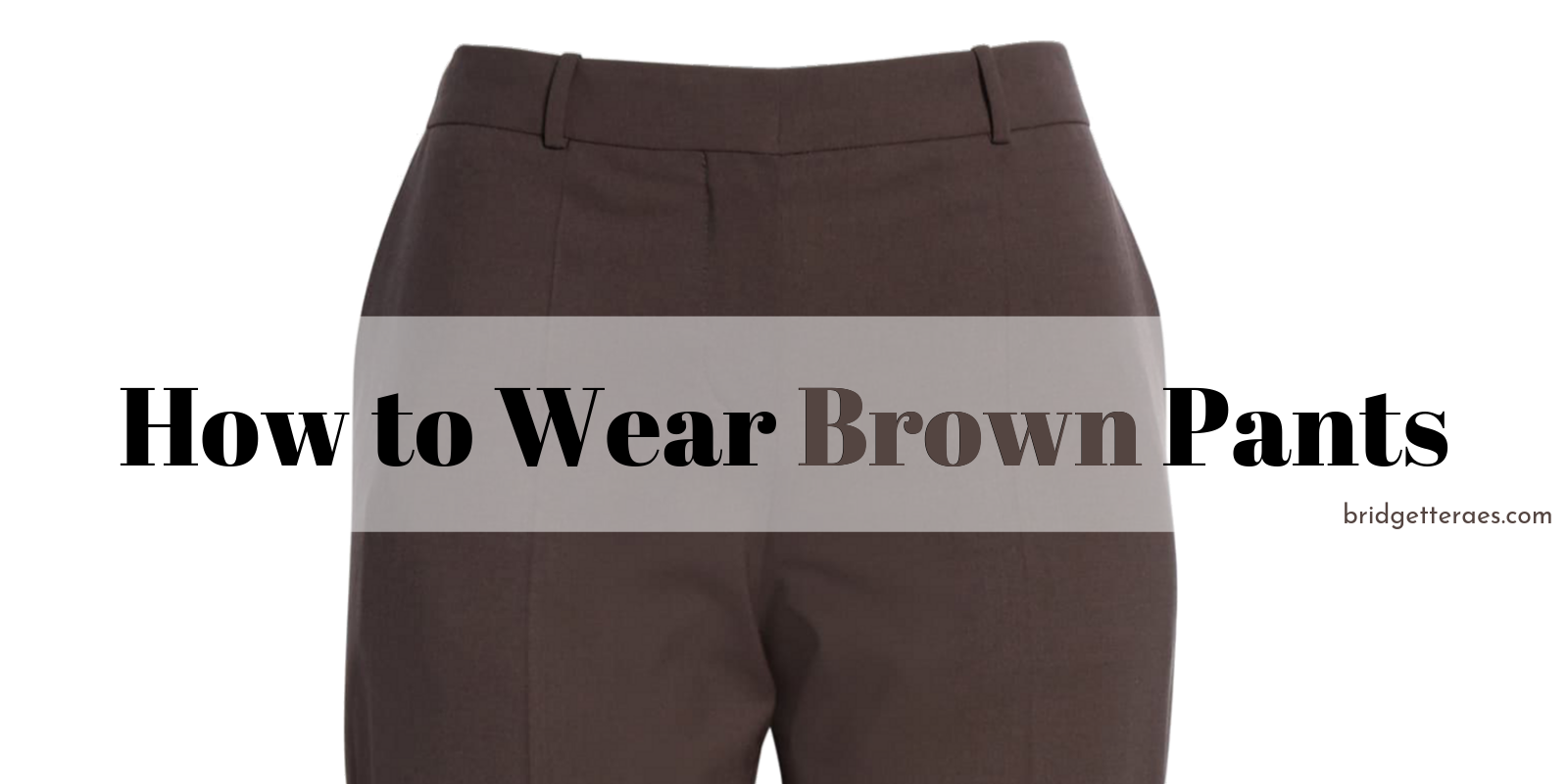 How to Wear Brown Pants

So true! This article is a great reminder to try new combinations at home, prior to facing the world. I can’t tell you how many times I wished I had. No more, thanks to your gently coaxing.

Once skipped attending a memorial for someone because I felt fat in everything that I had that was appropriate.

You’re not alone. I have spoken to other women who have found themselves in similar situations. It’s amazing how much our image can make our break our day.

What a great article…I didn’t really know why, but there are some things that I feel great in and never think about my clothes and other times I’m pulling at seams or just feel uncomfortable in; time to cull some things out of my closet:D…Thanks!

Thanks, Stacie! I am glad this resonated to strongly with you, even if you’re not sure why.