Simple + Chic: How to Create the Look 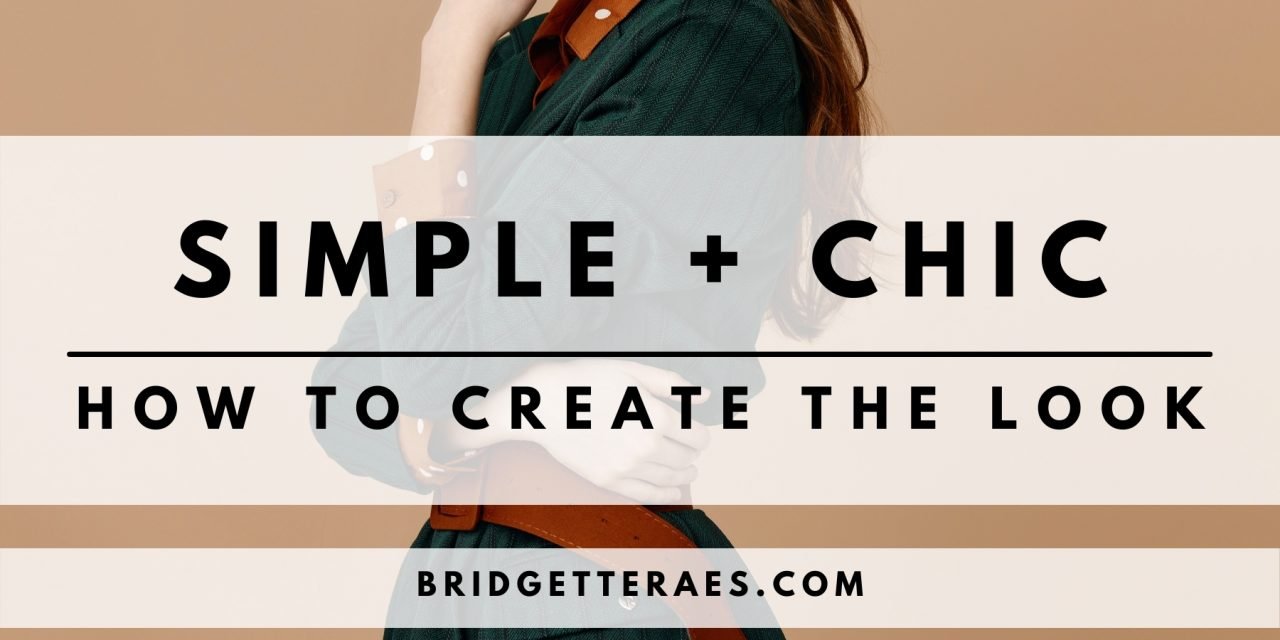 Do you remember the Chic Simple books? The books covered a variety of topics from fashion to home and more. Kim Johnson was responsible for the books on fashion. Each book was presented in the iconic Chic Simple minimalist way that made them not just instructional books but display-worthy beautiful ones.

I was OBSESSED with these books when I was younger, they resonated with me on such a deep and profound level. It was only recently when I considered how the simplicity of these books influenced me both as a fashion designer and a stylist. I loved the way uncomplicated clothing was brought together to create harmonious looks that looked timeless, elegant, and sophisticated. Nothing was ever overdone, pieces weren’t embellished, there were multiple uses for one piece, and each look was styled with good clothes that got you a lot of mileage.

When I was at FIT studying fashion design, no surprise, my favorite designer was Michael Kors for exactly the reason I loved the Chic Simple books. When I became a designer I chose to go into sportswear which is an area of design that involves putting together cohesive collections. As a stylist, my sensibility is definitely more classic-inspired and even if a client of mine has a style that is flashier than mine, I still employ many of the concepts of simple style, like mixing and matching, wearing items in multiple ways, and timelessness of an item to maximize wear.

SIMPLE + CHIC: HOW TO CREATE THE LOOK

Despite being simple in appearance creating a simple chic wardrobe takes some effort and know-how. As I have often said, when something looks easy it usually isn’t. This is why it can be such a struggle for a woman to execute simple looks that aren’t boring or too traditional or frumpy looking. Additionally, the pieces that come together to create a simple and chic look usually lack a lot of excitement on their own which makes it tough for someone who lacks a lot of style vision to figure out how to put outfits together. I will give you an example of what I mean.

Years ago, I was asked to speak at an event. It was one of those clothing swap events where people brought items they were looking to get rid of to trade with their friends. I brought a few items along, two pairs of classic pants. At the end of the event, all the exciting things were picked over and taken, and left behind were my two pants. It didn’t totally surprise me that my pants were left over. It’s hard for basic pants to compete with fun handbags, glitzy shoes, and other novelty items. But that was the reason why women struggle with creating simple looks, the basics are not exciting on their own. We are always more drawn to the shiny, fun objects than we are the good pieces that will be really useful in the bigger picture. So I dragged one of my friends attending the event to my pants and told her to try them on. I knew they would be perfect for her, and they were. She wound up going home with both pairs and likely got a lot more use out of them than the sparkly handbag that she used once or twice. I’m certainly not opposed to the fun, shiny things, I just believe in less over more.

If you are someone who wants to build a simple, chic wardrobe, here are some other characteristics of this style to keep in mind.

#1- Chic, simple style is not tricky, over embellished or overly trendy

When I got married, I wanted a dress that I would look back on in 20 or 40 years and still think was beautiful. Simple and chic style transcends trends. It’s why we look at images of Audrey Hepburn and still think she looks amazing, and if you look at what she wore, there was nothing tricked out, embellished or overly trendy about her looks. We can look at many of the most iconic women the same way.

As I said earlier, classic pieces on their own can lack a lot of excitement, yet it’s the simplicity of these things that give them the ability to be used in multiple ways. I was thinking about my client who I helped build a capsule for a year of living out of a suitcase and helped her create 90 different looks from only a few pieces. You can read that post here if you missed it. She got as much as she did from so little because each piece was very simple and classic in nature. A simple and chic wardrobe relies on the simplicity of its items.

Chic and simple looks are incredibly minimal and if there is a focal point there is usually just one that stands out from the rest of the look. Imagine something like a bold necklace, a great handbag, or a daring pair of eyewear. Keep in mind, while bold, these pieces should also have the same elegance and sophistication as the rest of the look.

Prints are subjective which makes this a tricky one. Simple and chic style doesn’t rely too heavily on prints and when prints are worked into a look it’s done so minimally and the prints that are used have a timeless sophistication to them, almost like art. The avoidance of too many prints is what also makes the wardrobe easier to mix and match.

There is a luxurious look to simple, chic outfits. This does not mean that you have to spend lots of money on your clothes, it just means that your clothing should look expensive and of quality. You want well-fitting clothing in fabrics that will last and will hold up.

Simple and chic clothing relies heavily on classic lines that don’t go out of style quickly. Just like you want to avoid overly embellished and fussy treatments on your clothing, you also want to select the cut of your clothing in silhouettes that have stood the test of time.

Chic and simple clothing often has structure. It’s a look that definitely leans towards tailored. Nobody thinks chic and simple when they think of boho outfits.

There is a restraint that is seen in outfits that are chic and simple. The clothing isn’t loud, it doesn’t hit you over the head, instead, there is a quiet strength to it that allows the woman to wear the clothes vs. the other way around.

Chic, simple looks lean more towards neutrals which aid in their mix-and-matchability. Colors often either act as a pop or are styled together in a harmonious way.

It should be noted that despite restraint, classic nature, chic styling, simple clothing doesn’t lack fun, modernity, creativity, or boldness, yet what should be noted is it’s the entire outfit, not the individual pieces that make these chic, simple outfits look interesting. Below, I have put together five simple, chic looks to give you some examples.

Let’s break this look down. If you saw these pieces individually in a store, it wouldn’t be immediately obvious what you could do with them. This is why a simple chic look, though it appears simple, isn’t easy for everyone. Each piece is classic, is without any huge embellishments or detail, not overly trendy or tricky. On their own, not memorable, but together, they are effortlessly chic.

I styled this look using these pants from BOSS with a basic silk shirt from Equipment. I finished the look with a basic beige cardigan from Nordstrom, taupe pumps from Cole Haan, taupe belt, camel bag from Rebecca Minkoff, and link necklace from Madewell.

In this look, you have some of the most iconically classic pieces coming together to create a chic, simple outfit. I styled this navy Veronica Beard blazer with a classic Breton tee and a pair of jeans from J. Crew. I finished the look with a pair of red espadrilles, silver hoops, and a navy handbag from Longchamp.

These leopard flats are an example of bringing one focal point to a simple, chic look. Leopard is a long-established print and the shoe style is incredibly classic, which also makes the style harmoniously work with the rest of the outfit. I am styling the same BOSS pants with a basic ivory short sleeve blouse that I layered under a red cardigan from J. Crew. I further finished the look with the same camel Rebecca Minkoff bag and a resin necklace from Kate Spade.

Here again, I am bringing classic pieces together and repeating pieces to create simple, chic looks. I styled the same Veronica Beard blazer with the J. Crew jeans and ivory Equipment silk blouse. I finished the outfit with the navy Longchamp handbag, leopard flats, and link necklace.

In this look, I am introducing these toffee-colored pants from The Fold and they fit in quite nicely. In this look, I styled the basic short sleeve blouse with the beige cardigan and finished the look with the resin necklace, taupe heels from Coach, and camel Rebecca Minkoff bag.

A simple and chic wardrobe is built holistically using classic pieces in interesting and creative ways. If you have been struggling to create a wardrobe like this, try incorporating some of the tips shared here. 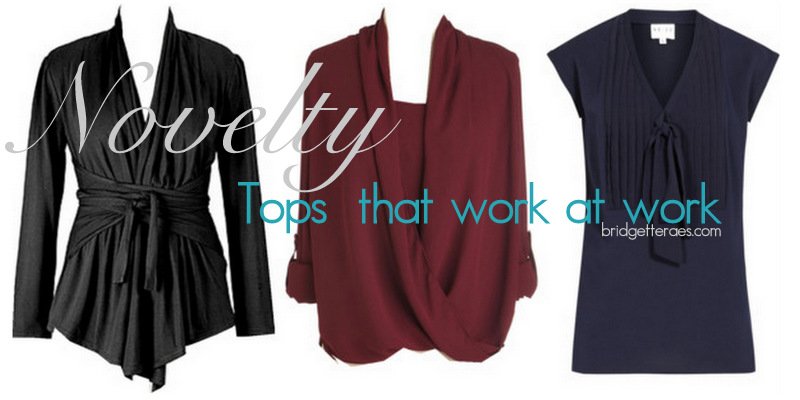 Novelty Tops For Work That Work 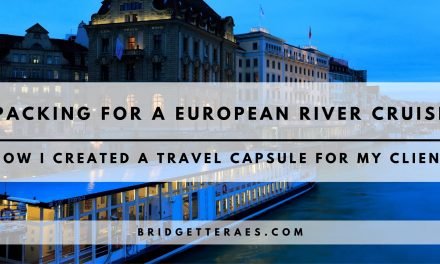 Packing for a European River Cruise: How I Created a Capsule for My Client

These outfits are so my style! I love simple and classic; patterns other than stripes (and maybe checks like houndstooth) make me cringe. My mom used to call me “Plain Jane” when I was growing up because I refused to wear pretty lace, ruffles, or anything pink! I do find myself gravitating toward more color since I’ve retired and let my hair go white, though!

I love these books – have 12 of them, 2 of which I purchased at the Goodwill just over a month ago. I want them all.

They’re all fantastic for all the reasons you stated even though they are well over 20 years old.

Excellent post! I do like my printed shirts, but I am also interested in this simple chic look.
Thank you for another series of great examples!

Kim Johnson’s Women’s Wardrobe was my “bible” in my early Corporate years. It was a delight to see your blog updating and expanding on Johnson’s timeless concepts for simple and classic. Thank you for this Brigette!

This is my kind of style. My wardrobe is probably 85% solids. My patterns tend to be small and geometric. I like that you only used about nine articles of clothing to create five very different looks. It’s a reminder to me to appreciate the versatility of my wardrobe and keep it small.