DRESS CODE REQUESTS ON INVITATIONS: YOUR VAGUE AND SUBJECTIVE DESCRIPTIONS AREN’T HELPING ANYBODY 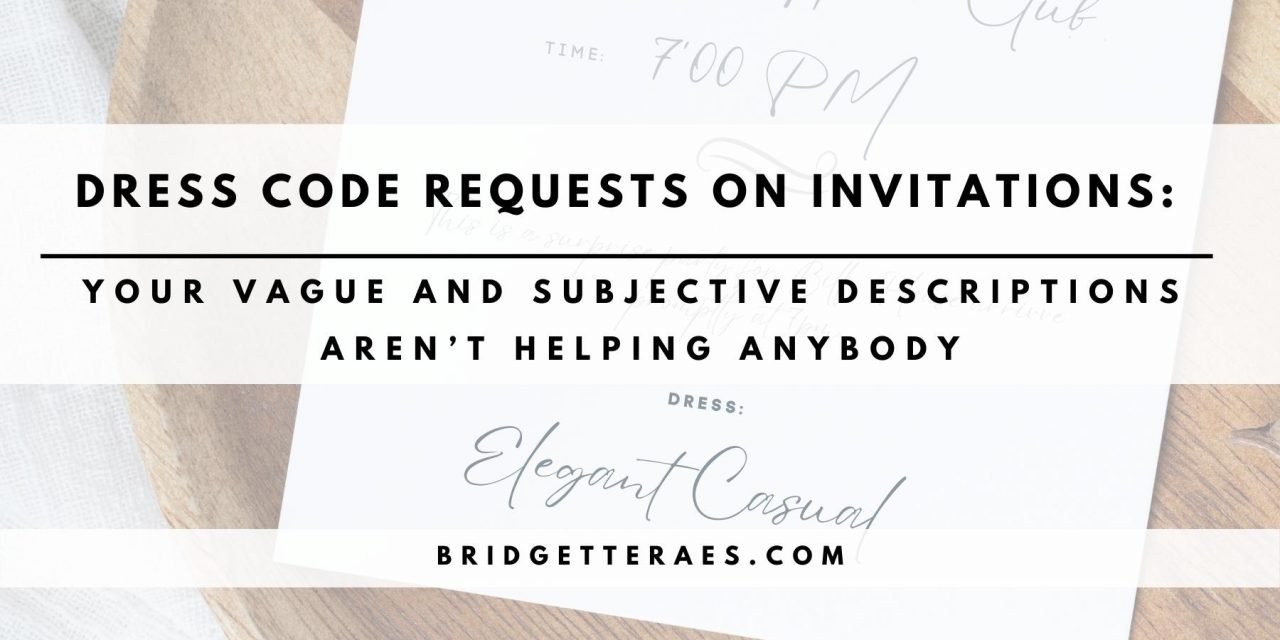 At some point, you have or will receive an invitation to an event with a dress code specification. Most often, the dress code is casual with an adjective or descriptor in front of it. The word casual is used to imply that the event isn’t formal and that cocktail or formal attire isn’t necessary. The adjective accompanying the word casual— usually words like dress, business, or smart — is used to let the invitee know the exact degree on the thermometer of casualness they should aim for. In theory, this approach should work. It should keep cousin Bob from showing up to a family reunion at a country club in his cut-off shorts, neon Oakleys affixed to the back of his head, and a large bag of charcoal briquettes slung over his shoulder like an accessory. Yet it doesn’t.

Despite that, people continue to send out invites using this method of communication to their guests on how they should dress. Whether the intention of the host is rooted in helpfulness or to be a control freak, no doubt, some guidance can be helpful. I just don’t think using this sliding scale of vague degrees of casualness is working. I mean, just look at cousin Bob, or Aunt Milly’s overstuffed extreme couponing wallet that fell out of her 10-year-old everyday bag when she attended that black-tie wedding.

It’s not so much the fact that we’re all out of practice being out in the world. I mean, sure, we have been shuttered away for a few years, but let’s be honest, even before the pandemic, dress codes on invitations were sometimes super vague. What does elegant casual mean to you? What does elegant casual mean to someone else? Unless your party has a specific theme, like a white theme or a 20’s speakeasy theme, addressing the dress code with difficult-to-decipher descriptors isn’t always helpful. In fact, they can create more confusion and stress. I know this because people who do get confused go to other equally confused friends for help, and bounce into Facebook Groups, like mine, or elsewhere to get answers. We have gotten so many inquiries like this in my group over the past weeks that my assistant Rachel suggested this post idea.

Subjective dress codes for events create problems, just as the subjective term “business casual” did in the workplace before companies started creating better guidance around exactly what that term meant specific to their workplace. If you leave things up to interpretation people are left to interpret things in their own way which is a guarantee not everyone will interpret things the way you want them to.

And while explicit guidance has proven helpful in the workplace, it’s not something I recommend you do on an invitation unless you want to be the Peter Brady of party throwers. Am I aging myself? Remember that episode where he threw a party and nobody showed up? Here’s the thing, even if someone is truly looking forward to your event, you need to temper your expectations. Your event is not the end-all-be-all event for everyone as it might be for you. It’s still a day out of their lives, and an event that may require getting a babysitter, juggling schedules, buying a new outfit, and just leaving the house that evening can be something that makes them moody. The added layer of a vague dress code that requires the Little Orphan Annie Decoder Pin to puzzle out exactly what you want your guests to wear doesn’t exactly embolden them to give up an evening and spend it with you.

If you feel like it’s important to indicate dress code on the invitation, call it one that is well known, can be easily researched online, and quickly understood. Don’t get super clever with names like Cultivated Chic, Downtown Polished, or Kicky Casual. You’re best off sticking with established names that can most often be easily researched, such as:

Let’s Be Honest, What is the True Goal of Adding Dress Codes to an Invitation?

Let’s also talk about who are you really trying to help when you put a dress code on an invitation. Yes, it’s partly for those who are going to start thinking about what they’re going to wear minutes after they receive your invitation; those who have looked up the event venue or the conference where they will be heading moments after they cleared their calendar. But, really, this person has far too much self-awareness to even fathom not doing their due diligence on their own to show up dressed wrong for whatever type of event they were invited to. It doesn’t matter if it is a barbecue or a gala, this person will make sure they have dressed appropriately and will likely dress a notch or two above because that’s just who they are.

Dress codes on invitations are for the invited guests who don’t think this way, like the cousin Bobs or the Aunt Millies. The problem is, cousin Bob and Aunt Millie or Glenda in accounting, who clearly hasn’t bought a new suit since 1984, either don’t care or really think that their outfits are exactly what you have indicated as the dress code attire on your invitation. And that’s the problem, there will always be a subjectiveness to the dress code that has been specified.

And this is what you need to ask yourself. At the end of the day, does it really matter? I mean, really? So cousin Bob showed up in his cut-offs because he thought the family reunion was a cookout or Glenda looked like a fool in her dated suit at the company party because the shoulder pads went up to her ears. So what if the rubber band keeping Aunt Milly’s bursting coupon wallet snapped and all her coupons spilled all over the dance floor? The way I see it, the grand majority of people will dress fine whether you indicate a dress code on your invitation or not. You’re still going to have a majority who do dress appropriately and a group that doesn’t, and I would bet money that the results would be the same whether you included a dress code or you didn’t.

All events have their guests who dressed appropriately, blend, and look presentable, regardless of whether they were told what to wear, and every event has its share of outliers who add that wacky flavor and give you something to laugh about later on…maybe much later on, but eventually it will be funny. You will laugh one day about how Aunt Milly’s BOGO Sensodyne coupon got stuck to the bottom of the groom’s shoe while dancing with his mother or how ridiculous cousin Bob looked wearing the country club’s issued blazer with his cut-offs and muscle shirt so he could be allowed to eat in the dining room with the rest of the family.

Other Ways to Set the Tone

In addition to coming out and saying what the dress code is on the invitation, you can find additional ways to set it so it is further made clear to your guests the type of party or event you are holding. People are visual and some examples could include:

If you are the Guest Don’t Stress So Much, You’re Likely Just a Sprig of Parsley on the Plate

As the guest who likely has a shred of awareness considering you’re reading this, you’re probably overthinking all of this anyway. Worrying way too much about what to wear to most large events, unless you are playing some pivotal role, for the most is a waste of energy and, to be frank, nobody really cares what you’re going to wear.

My mother, sister, and I have something we do when we all have an event to attend and where one of us gets caught up in worrying about what we’ll wear. Somebody will chime in on our group text and say, “Sprig of Parsley!” which brings the person concerned back to earth. Sprig of Parsley is meant to mean, in terms of importance, we’re all basically like that little garnish of parsley on the plate that nobody really cares about and most people usually push to the side.

Obviously, my mom, sister, and I all care about how we look (we’re terribly vain people), will put our best selves forward, and will always dress appropriately. Certainly, we’ll choose something to wear that we feel really good wearing, but we will also keep things in perspective. Unless we will be part of the focus of the event, nobody is going to care what we decide to wear and the likelihood that anyone will remember what we wore is highly unlikely. Essentially, we’re background noise or and our job is to blend. My goal in these situations is to focus on looking good, for me, and then focus on looking appropriate for the event. Even when I think back to my own wedding 15 years ago, I can envision my guests and can see in my mind what they wore, but I bet if I looked at my wedding photos, I would probably realize that my memories are wrong. All I remember is they wore clothes and they were appropriate.

The point is, unless the invitation requests that you follow a specific theme, just as you have likely been dressing for the grand majority of your life, and being someone who clearly has an active interest in fashion and, I’m assuming, a healthy level of self-awareness, you’re smart enough to figure out what to wear to your next event regardless of whether the dress code is subjective, vague or not indicated at all. And, if you’re still concerned, consider this, in all likelihood, you’re not the only one worried about getting your outfit right. When the event comes people will be far too concerned about what others think about what they chose to wear to be bothered to even pay attention to what you chose to wear. Unless, of course, there are the Cousin Bobs, Aunt Millies, and Glendas in accounting at the party who aren’t aware of anything. 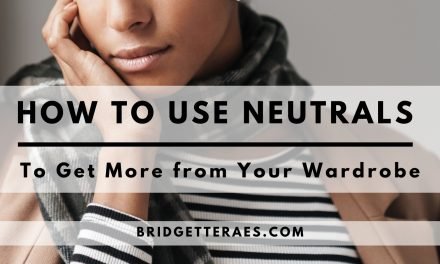 How to Use Neutrals to Get More from YOur Wardrobe 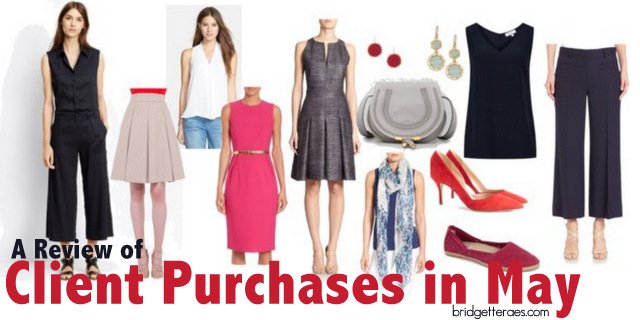 A Review of Client Purchases from May 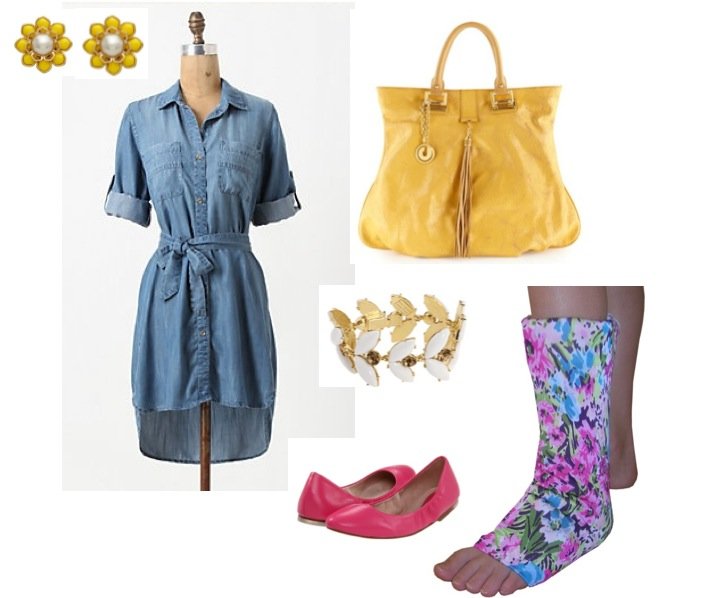 What is a Style Expert with a Sprained Foot to Do?

On a cruise to Alaska some years ago, a fellow guest proudly wore a brand spanking new pair of overalls. For the formal captains dinner. This was the newest and best thing he owned. He likely didn’t own a suit and had no use for one in his life.
I thought it was odd at first, but we were each wearing our own version of dress up clothing.

I can definitely see how that would turn some heads. I don’t know where this one lands for me. Like I get it and I like that there isn’t just one standard of what formal is because that version can tend to be very narrow and very marginalizing, but overalls was an interesting choice, for sure. But, how does one justify a suit when they don’t need one ever again? I am left wondering if there was something between overalls and a suit he could have considered. Ahh well, I am sure the dinner carried on just fine, and in terms of the bigger picture it was no big deal.